On the tender from the ferry docking in Singapore harbor that Christmas Eve, across from me sat a Yank –  an “older man” – engrossed in a book.  I watched him read, getting vicarious pleasure from seeing someone so absorbed in a work of serious, worthwhile fiction. It had been  months since I’d been able to get my hands on acceptable reading material.   He looked up and saw me studying the cover of his paperback.

“The French Lieutenant’s Woman,” he said. “Have you read it?” He passed me the book. John Fowles was one of my favorite authors. He was almost finished, he said, then I could have it.

Paul told me he was from Alexandria VA, retired from the FBI – which turned out to be true, he showed me his badge. He had a neatly trimmed moustache, dark blond hair, kind of a craggy face creased from lots of sun. We’d both ferried here  from Jakarta, where I’d spent a few hours wandering around before boarding, the conclusion to a 2-month stay in Indonesia. 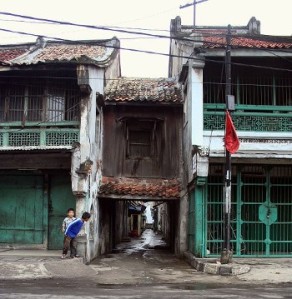 This section of Jakarta appears unchanged since December of 1975

We shared the stories of our shipboard   experiences – which differed dramatically. He’d slept in a bed.   These policies have probably changed in the last 30 years, since so many overloaded Indonesian ferries have sunk between Jakarta and Singapore, but in those days they would take as many passengers onboard as they could collect fares from.  Westerners got preferential placement. We were allowed to camp out on the first class deck, breathing fresh air and sleeping on clean, usually dry hardwood planking. I stretched out on a sarong, my head on my backpack. My wallet containing 2000 rupias and change – just under $6- had been lifted before we left port. There went my funding for meals during the 2-½ day voyage.

More alarming was the loss of the never-used American Express card I’d brought from home for emergencies. Nobody who took it would have known what it was – but I’d been counting on it as backup to get home from whatever European city I’d end up in, months from then. A couple English-speaking Indonesian college boys were hanging around the first class deck. We had a little talk.  If they happened to know who had the American girl’s wallet, I said, tell them they could keep the money but please, please, return the wallet.

I told Paul how I’d found the captain in the airless,  foul-smelling cargo hold. That was where the extra Indonesian passengers got to stay- hundreds of them packed in on a wet concrete floor  like slaves or refugees, not paying passengers. Horrifying. The captain sort of understood English. He wrote down my plea for the wallet’s return, and announced it over the loudspeaker.

When I returned to my spot on the upper deck, there it was. They’d taken the folding money and left me the AMEX card and 300 rupias in change – about 80 cents. This bought me  one meal – a scoop of white rice topped with a fish head on which I passed – and enough tea to get through a couple days.

FBI Paul knew Singapore – great places to  eat, and an open air market that sold English-language used books.   We had an authentic Chinese feast for Christmas Eve dinner. We shopped for books.  That’s where I found Paul Theroux’s book The Great Railway Bazaar, which became my bible for that trip.

My companion insisted on spotting me a night at the Strand hotel – real showers, real beds with clean sheets. The next day, not wanting to impose on his hospitalit or give him what  girls then referred to  as “the wrong idea” I checked out and got a room above a Chinese restaurant.  He helped me get settled. 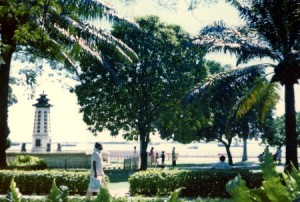 On Christmas Day I wandered around the pristine city (when people get caned for littering, things stay pretty spic and span) stopping outside churches to listen to Chinese Christians singing hymns. I wandered down Queen Elizabeth Walk along the Harbour, stopping to read and people watch. Heaven in a dictatorship. It was warm and breezy, not oppressively hot and humid like in Indonesia.

At some point I met a soldier on leave from the Singapore army – a Hokkien Chinese who spoke perfect English. “Steve” had a fiancée waiting for him in Canada, where he planned to emigrate. He showed me the sights – Tiger Balm Garden – kind of a cheesy theme park – and took me out for Hokkien chicken. He ate with his fingers, sucking all the bones clean and piling them on the table. I was grossed out but this is how Hokkiens eat chicken. Chinese and Yanks have different table manners.

The night before I left as I was walking up the stairs to my room above the restaurant I crossed Paul coming down.  He’d come to check on me. I was staying right down the street from Raffles, Singapore’s famous hotel from British colonial days. In huge rattan chairs where a plaque said Somerset Maugham and Rudyard Kipling used to sip cocktails, we had a farewell drink.

Paul was probably in his early fifties. He may no longer be among us, but if he is – or not –  I wish him a Merry Christmas –  across the miles, across the years.